The Importance Of Outsourcing For The Global Economy

This blog examines the macro - and micro - economic implications and benefits of what is most commonly referred to as ‘outsourcing’. We, therefore, use this term for ease of reference in this article but would like to point out that Sharesource is not a ‘traditional’ outsourcing provider. We connect smart people in developing countries with businesses that are solving world problems. It’s important to us that we provide meaningful work and an uplifting and motivating culture to ensure that our teams progress the vision of companies doing cool work. As a social enterprise, we care about so much more than just the bottom line. We’re about changing lives for the better and providing solutions to global challenges.

As Forbes points out, outsourcing has dramatically transformed the global economy. Our jobs, consumption patterns and entire lifestyles are partly shaped by the rippling effects of past outsourcing deals. The low costs offered by outsourced contracts - often vilified at the time - actually streamline the structuring of the economy. Apple, for instance, does not make any of its own products - production has long been outsourced to places like China. This has allowed the California-based company to focus on enhancing its competitive edge: design and user experience. Outsourcing has allowed Apple, like countless other companies worldwide, to offer consumers high-quality design at relatively low prices. Worrying about production lines, operational issues and other potential logistical issues would only detract from the super-creative atmosphere that the tech company currently enjoys. In short, outsourcing fans Apple’s entrepreneurial and artistic spirit. Whilst Apple’s success is obviously not entirely due to outsourcing, it has most certainly had a positive impact. Outsourcing unburdens many companies all over the world of operational drudgery and catapults them to international and enduring success. Shareholders benefit and consumers enjoy lower prices and greater choice. When outsourcing fragments the supply chain, supporting jobs are created across the world from a workforce that becomes increasingly specialized and more productive. Outsourcing can cut jobs in one part of the economy but also generate work elsewhere.

On a macroeconomic level, many developed countries such as the US rely heavily on the savings made from outsourcing to balance out all of the revenue lost from imports. A developed economy cannot depend on internal sales alone, it needs to be able to sustain business from other countries. When a developed country outsources to a developing country, it pours significant investments into that country which allows it to boost its economy. Instead of having a high rate of unemployment, opportunities are provided in different fields for people to earn an income, lift themselves out of poverty and help stabilize their economy. In turn, those same countries are able to become bigger players in the global market and are able to buy more exports from the countries that outsourced to them. Simply put, outsourcing plays a beneficial and cyclical role in the world economy.

Sceptics may feel that the lower salaries paid by outsourcers in developing countries are tantamount to exploitation. However, this view fails to understand the benefits these modest wages can bring to foreign workers and their respective economies. Whilst the lower salaries may seem scandalous in developed countries, the reality is they are often life-changing for the people receiving them in the developing world. They may even mean the difference between a life of borderline poverty or one of relative prosperity for both themselves and their families.

Outsourcing boosts growth in developing country economies due to the influx of new money. Individuals working for an offshore outsourcing provider inevitably have more money to spend. This means they will buy products and services from sectors in which they wouldn’t otherwise shop, ultimately boosting these sectors.

One of the biggest win-win aspects of growing foreign economies through outsourcing is they will develop into potential future business partners for developed nations. Their stronger economies will allow them to conduct business on an international level and purchase products and services from the very nations that outsourced to them in the first place. This demonstrates the benefits of outsourcing coming full circle - and how interconnected the world actually is.

Outsourcing addresses one of the biggest challenges faced by the world today:- the growing gap between the world’s richest and the world’s poorest nations. Building international peace, security and prosperity through globalization will allow a better future for all of humanity.

If you’re looking at outsourcing not only as a way to benefit your bottom line but the world at large, download our eBook '30 Essential Questions to Ask a Provider Before You Outsource’. It will ensure you're informed and have the right questions to ask when considering the next step. 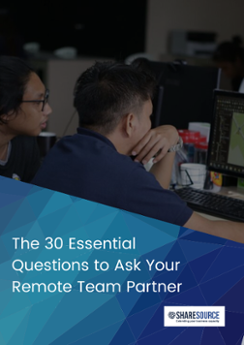