Doughnut Economics - More Relevant Than Ever

As Wikipedia puts it, ‘Doughnut Economics: Seven Ways to Think Like a 21st Century Economist’ is a counter-proposal to mainstream economic thinking that formulates conditions for a sustainable economy. Doughnut Economics advocates reconsidering the foundations of economic science. Instead of focusing on the growth of the economy, the book focuses on a model where there can be ensured that everyone on earth has access to their basic needs, such as adequate food and education, while not limiting opportunities for future generations by protecting our ecosystem. The book was written by Kate Raworth of Oxford University’s Environmental Change Institute and was longlisted for the 2017 Financial Times and McKinsey Business Book of the Year Award.

As the FT’s synopsis of Doughnut Economics: Seven Ways To Think Like a 21st Century Economist highlights: economics is broken. It has failed to predict, let alone prevent, financial crises that have shaken the foundations of our societies. Its outdated theories have permitted a world in which extreme poverty persists while the wealth of the super-rich grows year on year. And its blind spots have led to policies that are degrading our planet on a scale that threatens all of our futures. The great mistake of economics, argues the author, is thinking of the economy as separate from the society of which it is part and the environment in which it is embedded.

Can it be fixed? The Doughnut is the core concept at the heart of Doughnut Economics and offers a vision of what it means for humanity to thrive in the 21st Century. It can be thought of as a compass for human prosperity in today’s world, with the aim of meeting the needs of all people within the means of the living planet. The Doughnut consists of two concentric rings: a social foundation, to ensure that no one is left falling short on life’s essentials, and an ecological ceiling, to ensure that humanity does not collectively overshoot the planetary boundaries that protect Earth's life-supporting systems. Between these two sets of boundaries lies a doughnut-shaped space that is both ecologically safe and socially just: a space in which humanity can thrive. The Doughnut's holistic scope and visual simplicity, coupled with its scientific grounding, has turned it into a convening space for big conversations about reimagining and remaking the future. It is now being discussed, debated and put into practice in education and in communities, in business and in government, in towns, cities and nations worldwide.

The FT goes on to point out that Raworth identifies seven critical ways in which mainstream economics has led us astray, and sets out a roadmap for bringing humanity into a sweet spot that meets the needs of all within the means of the planet. She deconstructs the character of ‘rational economic man’ and explains what really makes us tick. She reveals how an obsession with equilibrium has left economists helpless when facing the boom and bust of the real-world economy. The dangers of ignoring the role of energy and nature’s resources are highlighted - as well as the far-reaching implications for economic growth when these are taken into account. In the process, Raworth creates a new, cutting-edge economic model that is fit for the 21st century - one in which a doughnut-shaped compass points the way to human progress. Arguably one of the most authoritative and respected economic references of today, the FT describes Doughnut Economics as “ambitious, radical and rigorously argued, promising to reframe and redraw the future of economics for a new generation.”

The COVID-19 pandemic has forced businesses globally to re-think their strategy and devise new ways of hitting a triple bottom line of profit, people and the planet. If you need help finding super-smart tech talent to help you scale quickly and cost-effectively, working with a remote team in a developing country could be the answer. For more detail around tapping into the best global talent with remote teams, download our eBook, ‘30 Hints & Tips To Get The Most Out Of Your Remote Team’. It will ensure you're informed and have the right questions to ask when considering the next step. 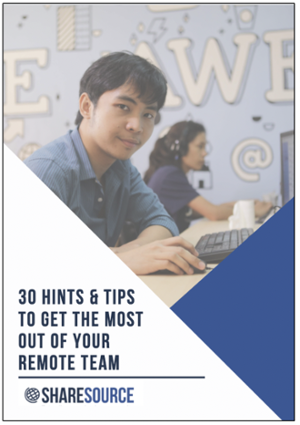